Three boys in 4th Class Eoghan Brennan, Darragh Riordan and Aaron Whelan have written and recorded a song about the school bug hotel. Click on the link to listen to the song which we have saved on the school website and sing along to the lyrics which are written below.
The Bug Hotel Song
The Bug Hotel song is the first song of the Band pictured above. The boys who have yet to think of a name for themselves continue a long tradition of Scoil Na Mainistreach bands many of whom have gone on to stardom including Bell X1, Damien Rice, Fresh Ré and more recently Vintage Outrage who coincidentally recorded their first song the Bow Wow Song which helped the school win our 3rd Green Schools Flag!! 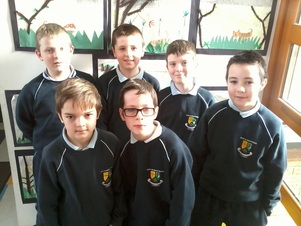 Biomax Song
Inspired by the original Wimax song 6 boys in Ms Manns 4th class have written a Biodiversity song called the Biomax Song. Kevin, Eavan, George, Cormac, Shane  and Robert wrote the song and after lots of practice have now recorded it. The boys would like you all to listen to and enjoy their song and they hope it can help the school win the green flag. Click on the link below and then scroll down the page to the Biomax song.
Biomax Song 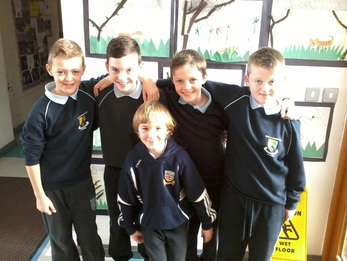 Happy Song by BIO-D
Pharrell Williams better watch out as a group of 5 boys in Ms Manns class called BIO-D have recorded a version of his Happy Song. Darragh, Ethan, Conor, Evan and Ciaran got together and recorded this catchy little tune which they hope you all enjoy!  Click on the link below and then scroll down the page to the Happy Song.
Happy Song 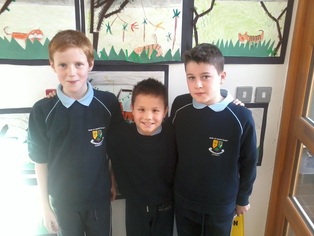 The  Gardeners
The same Mr Williams will be having a few sleepless nights when he realises that the competition has gotten even hotter!! 3 boys in Ms O Rourkes class have also produced their own version of the Happy Song. The Gardeners are made up of Sam, Eoin and Alan. The boys managed to record their song in just one take!! To hear their song click on the link below and then scroll down the page to The Gardeners.
The Gardeners
Powered by